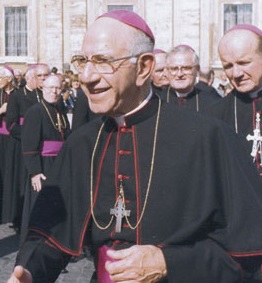 In recent months, doubts have been raised by members of the so-called "Bayside Movement" concerning the official position of the Diocese of Brooklyn on the alleged "apparitions" of the Blessed Virgin Mary, and other heavenly beings, to a woman by the name of Vernica Lueken.

Moreover, erroneous claims have been made by a number of followers of Mrs. Lueken concerning the legitimacy of their position, in order to justify their activities on behalf of the "Movement." These have taken the form of statements in their publications that "since Articles 1399 and 2218 of (the 1917 Code of) Canon Law were abrogated by Pope Paul VI in 1966, no ecclesiastical permission is required, neither can anyone incure censure, for the publication or dissemination of information dealing with revelations, visions or miracles, provided these do not endanger Faith or

As a result of the above-mentioned doubts and claims, a number of Christ's faithful continue to attend the regularly-scheduled "vigils" held atFlushing Meadow Park, and to disseminate or receive propaganda literature on this matter.

I, the undersigned Diocesan Bishop of Brooklyn, in my role as the legitimate shepherd of this particular Church, wish to confirm the constant position of the Diocese of Brooklyn that a thorough investigation revealed that the alleged "visions of Bayside" completely lacked authenticity.

Moreover, in view of the confusion created by published reports of messages and other literature by this "Movement," I consider it my obligation to offer Christ's faithful pastoral guidance, lest their faith be endangered by "messages" and "teachings" relayed by "visionaries," which are contrary to the Faith of our Catholic Church.

Therefore, in consultation with the Congregation for the Doctrine of the Faith, I hereby declare that:

1. No credibility can be given to the so-called "apparitions" reported by Veronica Lueken and her followers.

2. The "messages" and other related propaganda contain statements which, among other things, are contrary to the teachings of the Catholic Church, undermine the legitimate authority of bishops and councils and instill doubts in the minds of the faithful, for example, by claiming that, for years, an "imposter (sic) Pope" governed the Catholic Church in place of Paul VI.

3. Those who persistently maintain that "no ecclesiastical permission is required for the publication or dissemination" of information concerning "revelations, visions or miracles," are erroneously interpreting the directives of the Holy See when they attempt to justify the publication of the propaganda literature on the "Bayside Messages."

In view of my declaration concerning the authenticity of the "visions of Bayside," the Congregation for the Doctrine of the Faith has confirmed that the principles governing the publication of such religious material still maintain authoritative moral value prohibiting the endangering of faith and good morals (Cf. Response of SCDF of June 14, 1966, in AAS 58, 1186).

As a result, those publishing or disseminating this propaganda literature are acting against the judgment of legitimate Church authority.

4. Because of my concern for their spiritual welfare, members of Christ's faithful are hereby directed to refrain from participating in the "vigils" and from disseminating any propaganda related to the "Bayside apparitions." They are also discouraged from reading any such literature.

5. Anyone promoting this devotion in any way, be it by participating in the "vigils," organizing pilgrimages, publishing or disseminating the literature related to it, is contributing to the confusion which is being created in the faith of God's people, as well as encouraging them to act against the determinations made by the legitimate pastor of this particular Church (c.212, para. 1).

It remains my constant hope that all the faithful spend their time and energies in promoting devotion to our Blessed Lady, in the many forms which have been approved by the Catholic Church.